Read what our customers are saying...

When Seadogz commissioned their new “Redbay” Stormforce 9.5m, twin 300hp rib in December 2011 we considered having the hull anti-fouled. She would be kept on the same pontoon at Ocean Village in Southampton as our last boat, which was not anti-fouled. Our experience here was that in-spite of running daily at high speed for much of the summer we experienced considerable build up on the hull. A once or twice a month lift to jet wash barely did the job and we found ourselves involved with rubber gloves, mild scourers and expensive cleaners in an attempt to get the gel coat back to shiny white.

We had resisted anti-fouling in the past because of the reduction in fuel economy and performance bought on by the increase in drag of an anit-foul coating. But the time and cost of removal and lifting was becoming an issue as was the gradual deterioration of the gel coat.

For the new boat we therefore had a choice, anti-foul or something else. Having nothing was not an option. We decided to try Ultrasonic Anti-fouling and had a single transponder installed during the build. The cost was not high, it’s actually not to dissimilar to an anti-foul coat.

It was a gamble as there is little data relating to this system on smaller fast moving Ribs or power boats. However our experience has been very positive. The Rib is still lifted about once a month for a service and the hull is jet washed. Now, any build up just drops off the hull like it’s “teflon” coated. The build up is a thin layer of what can only be described as brown slime and it comes off if you just rub your finger over it. The gel coat beneath is shiny and smooth and doesn’t look like anything has managed to eat into it.

There is however a normal build up on the transom and legs of the outboards which we can get to and clean every couple of days with a brush. For us this just highlights how bad the rest of the boat would have been if not protected by the Ultrasonic system.

Over all we are very impressed. We have kept out fuel costs down, speed up and greatly reduced the man hours needed to keep the gel coat in shape (it’s more like man minutes now). And of course we don’t need to have a change of anti-foul every year or so which saves more money.

Thoroughly recommended if fuel efficiency and performance is an issue. We would fit it again without hesitation. 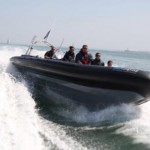 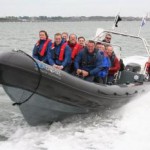